CAN DOUGLAS MAKE IT A TRIPLE TREAT ?

Saturday night’s Mallee Bearings, Jason Lyons Solo Trophy will be the ultimate test for Queensland rider, Ryan Douglas, as he attempts to make it three winning meetings in a row at Mildura’s Olympic Park Speedway.

Douglas will again ride in top company as he will pit his skills against triple World Champion, Jason Crump, Victorian Champion, Justin Sedgmen, former Australian Champion, Rohan Tungate, World Under 21 Champ, Jaimon Lidsey, Jordy Stewart, Jack Morrison, Dak Ballantyne and a group of others young riders who are all improving their skills constantly with more work at Mildura, with all of them being keen to grab [points off the more fancied riders.

The Jason Lyons Trophy is a hallmark meeting at Mildura and will feature the regular sixteen rider, twenty heat and two Finals format, with, at Lyons’s insistence, a good field of Sidecars, as Lyons believes that speedway at Olympic Park is always, Solo and Sidecars. A small, but very competitive group of juniors will compete in support events on their 250cc machines, but ride on the big Olympic Park circuit.

Jason Crump has been in scintillating form since his resumption of riding after an eight-year layoff. Crump showed fans at Mildura and those watching live on the Olympic Park Live Stream around the World last week that he has lost none of his “gating” skills, as he drove very positively from the start on every occasion. Crump is enjoying racing again, saying, ”that, now I do not need to be World Champion – I can ride for the enjoyment” which is such a positive attitude from the rider who finished on the World podium every year for a decade when at his peak.

Crump was able to use his great experience and silky skills to just “drop in” on Jordy Stewart with just 5 metres to go in the Solo Masters final just two weeks ago to claim second place. While Stewart did nothing wrong and had not eased off the throttle, it was Crump who rode a splendid turn three and four on the last lap, got his wheels in line and drove hard to the finish, just catching Stewart with just metres to go. All the guile that Crump rode so successfully with when in his top form is still evident and it seems as, “when Crump needs to pull one out . . . . . he can . . . . .  as all great Champions can do”

Rohan Tungate was to have ridden in the Phil Crump Trophy, but was stymied by the Covid 19 restrictions, but is fine to ride this weekend, in a meeting which he has won before. Tungate had originally had a problem when riding at Mildura until his Aussie Title year of 2017, when he seemed to come to terms with the circuit and he now uses the venue as a venue of choice.

Justin Sedgmen was again a gallant second to Ryan Douglas last weekend in Adelaide, as Douglas won the South Australian Solo Title for the first time. Sedgmen was fast all night but allowed Douglas to just sneak ahead of him mid final while Gilmore had the better of Jordy Stewart, and, in doing so, has secured a treasured UK Work Visa qualification should he need it.

Stewart has been a constant this season, showing great improvement and always riding against very tough opposition, so he will be out for success this weekend.

Virtually every heat for the Lyons Trophy will be vital, as points will need to be collected all night to ensure that riders finish in the top seven points scorers, so as they get a chance to win the prestigious Trophy. Maybe as few as six to eight points will get a rider into the “B” final where it is still a “cut throat” chance to continue to the last race of the night.

Sidecars will bring in a hint of what the rest of the season will bring as there are eight “chairs” ready to do battle as part of the Lyons program. A good even field is nominated with Club President, Neale Hancock / Tubs Johnson, Byren Gates / Mick O’Loughlin and Simon Cohrs / Cam Diwell, being the locals. A strong group are coming down from Broken Hill with Darren Howse / Jack Wheeler, Ricky “the Bartman” Stephens / Daz Whetstone and the newish young duo, with top Sidecar breeding, Max Howse / Riley Commons, who will take over the Silver City mantle held for so long by their respective dads, Rick and Adam. Added to the group are Melbourne riders, Mark Radford / Blake Halls and the father and son combo, Matt and Jamie Crundwell.

Olympic Park fans will be keen to watch the development of the second Howse / Commons team to come out of Broken Hill. The boys have ridden together as juniors, with some success and with the background of having Dads who are more than proficient, in fact, second in Australia a few years ago, it augers well for their long term success. The “Bartman” takes excellent and former Aussie Champ passenger, Daz Whetstone alongside, in what will be a good move for the affable Stephens. He and Whetstone will make a formidable duo, with vast experience coming to the fore. Darren Howse, with Jack Wheeler have just ridden better each season and last year took some healthy scalps with their smooth and fast style. Radford / Halls are regulars at Mildura as too are the Crundwell team and all will be keen for a “hit out” prior to things getting serious later in the year.

After this week’s Lyons meeting the Mildura Club will turn its attention to the Sidecar fraternity, as the feature meeting for the season will be the conduct of the KW Earthmoving & Concreting, 2021 Australian Sidecar Championships, to be held over the Anzac weekend on 23rd and 24th April.

The popular 250cc machines ridden by the older juniors will again be exciting to watch as the best exponents of the smaller engine know that the machine can be ridden “flat out” for best effect. The battle between James Pearson, Jacko Milner, the two Riley’s, Plum and McCarthy, Mick Cogdell and Broc White will be intense, if nothing else.

Olympic Park gates will open at 5:00pm as usual and the Club advises and asks that all patrons please observe the Covid 19 requirements set by law. A QR code can be scanned or a log sheet can be filled in upon entry to the Stadium. The Club provides ample free grandstand accommodation or patrons can bring a chair or rug and avail themselves of the excellent grassy banks which surround the Stadium. Bunted lanes at the entry point to drinks and food concessions are provided and the Club asks that people observe the lanes and also maintain their ”safe distance” when in the spectator area. An Eftpos facility is located at the Stadium entry point for the convenience of patrons.

It is vital that Covid conditions are observed by patrons as this is the only way that our Club can conduct successful meetings. Please help us to continue exciting racing at Olympic Park. 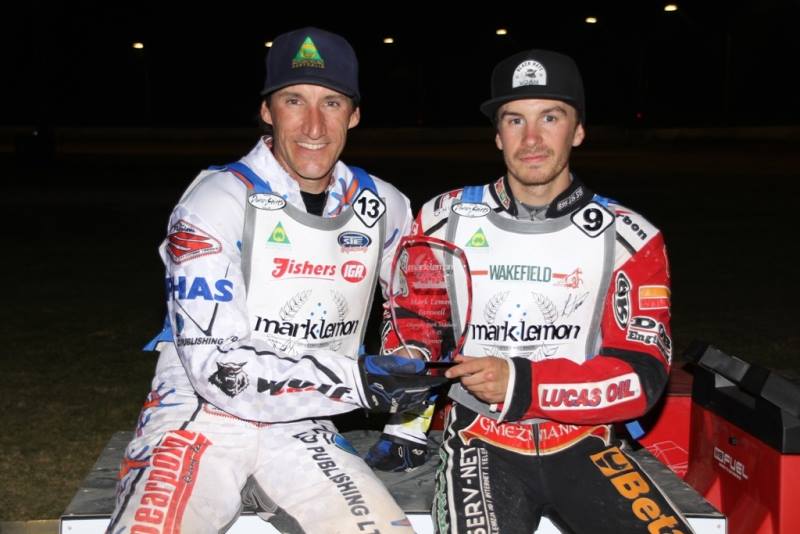