An amazing display of Speedway Sidecar riding from the undisputed “greatest rider of all time”, the incredible Darrin Treloar and Blake Cox, were unbeaten to take the prestigious “Monaghan Logistics”, Gates Sidecar Cup at Mildura’s Olympic Park Speedway, on Easter Sunday night.

Treloar did not have things all his own way even during the heats, as there was pressure applied by local stars, Warren Monson / Andrew Summerhayes and also by Mick Headland / Brenton Kerr and Mark Plaisted / Ben Pitt, however on every occasion, Treloar was able to prevail and take the heat wins during the course of the meeting to end the night on 15 points.

Headland / Kerr and Plaisted / Pitt both, completed the heats on thirteen points with both teams losing to Treloar and Headland dropping a point to Plaisted while Plaisted dropped his only other point to Monson, in the final heat of the night.

Monson had a wretched run compared to his other meetings at Mildura this season, as he was excluded for an infringement against Hancock / Johnson, the young Broken Hill pair of Max Howse / Riley Commons and Simon Cohrs / Cam Diwell, when he only finished with ten points from his heats. This poorer score line from Monson only allowed him into the “B” Final with second pick after Mildura Club President, Neale Hancock / “Tubs” Johnson.

Thankfully, the meeting was a safe one with nobody requiring any Medical attention, even though the racing was the toughest seen at Olympic Park for a while. Riders are now showing great respect for each other which has been heavily suggested by Mildura Club officials. Racing was certainly “willing” and all heats had a great level of excitement for patrons in attendance.

A sad note was that during the introductory, “Dash for Cash,” held immediately prior to the Gates Cup, the local combination of Byren Gates / Mick O’Loughlin, slowed considerably while in their pre-timed fast lap when Byro sensed a lack of power from his machine and rolled the throttle off to not record any time. Further investigation in the pits prior to the start of racing did not disclose any obvious engine problem, but the machine was not running on all cylinders, so the bike was put to rest for the night. There will be many hours spent “in the shed” this week in getting the engine back up to “spec” and ready for next weeks, annual Mildura Sidecar Shootout.

Bad luck also plagued Dave Bottrell / Darcy Risstrom and to a slightly lesser extent, to Chris Walker / Phil Bourne-Bryant, who only completed two heat rides. Bottrell recorded a good time in the Exposed Signage & Apparel / Saint Workwear, Dash for Cash, was then excluded in his first heat for a barge against Howse / Commons and then did not appear after that with a mechanical problem, yet to be solved.

Heat races were full of action and high drama as riders were all intent on getting into the top seven points to make either the “B” final or get an automatic elevation directly into the Gates Final by being in the top three points for the heats.

Some teams probably tried a bit hard, given the importance of the Gates Cup and many of the knowledgeable patrons in attendance held their breath as the contests were sometimes quite tough, however the were no big crashes, which was good for the night.

The “B” Final was interesting, as, after the indiscretion against Monson in heat 15, it left Hancock / Johnson with eleven points to take first pick and gate 1 while Monson finished on ten points and chose gate two with Dwyer / Flood taking third selection with their nine point collect and Howse / Wheeler,getting the last spot in gate four, on a count back from Cohrs / Diwell, who both finished on eight points.

Once the tapes were gone in the “B”, it was a great start from Monson and whilst the other three riders battled hard against each other, it was never going to matter, as Monson, who showed great control, just extended his lead with each lap and cruised to a spot in the Gates Final. Hancock was stiff to be on the outside of Monson into turn three on the first occasion and, whilst he had to roll off the throttle it took his momentum away along with any chance on getting back onto Monson / Summerhayes.

The presentation of the Monaghan Logistics, “Gates Sidecar Cup” was made by three generations of the Gates family with father, Les, who had a long career as a well-regarded Sidecar passenger and engine builder, son Byren, who missed out on competing in the event and grandson, Kayden, who will ride in the Australian Junior Sidecar Championships to be held at Olympic Park on Friday 23rd April.

On the podium, winner Darrin Treloar paid great tribute to the Mildura Club and the Track Managers for the presentation of an excellent racing surface, which provided constant grip over the entire track. Treloar said the “it was always a pleasure to come and ride Olympic Park as the facilities are World class and the meetings are always run in a cordial manner in front of a very appreciative crowd”. The Gates Cup was the first major win for Treloar in his lead up to the 2021 Titles, where Treloar is hoping to collect his twelfth National Title.

Mick Headland / Brenton Kerr were also full of praise for the venue, which is really their “home track”, as Brenton is a Mildurian and part of the Track building team.

For their first visit to Mildura for the current season Mark Plaisted / Ben Pitt, had done very well, finishing third after scoring thirteen points, but had had a big collect in the Exposed Signage & Apparel / Saint Workwear, “Dash for Cash” which had opened up a great night of racing.

Next meeting at Mildura will be next Saturday night, 10th April, when the Club will host the Gardenland Nursery Supplies, “Mildura Sidecar Shootout”, which will see the awarding of the Dudley Bradshaw Memorial Trophy by members of the Bradshaw family. The “Shootout” will be the last chance for riders to try out at Mildura prior to the KW Earthmoving & Concreting, 2021 Australian Sidecar Championship, to be held over the Anzac weekend on the 23rd and 24th April.

Motorcycling Australia, Track Commission have announced that ten riders, the top two from each Sidecar State, have been “seeded” directly into the 2021 Title and another sixteen riders will fight, via a “Qualifying” meeting to select the last six teams to enter the Championship.

A most interested crowd will be in attendance this Saturday as it offers the last chance for many of the “qualifier” field to get a run prior to the second most important meeting in the country.

Covid compliance is still a strict requirement for the Mildura Club and Club officials have been most pleased with the past co-operation of patrons who have been attending the venue over the current season. “It is a small task for our patrons to ensure our compliance and it is not a massive inconvenience prior to entry of the Olympic Park Stadium, said Club President, Neale Hancock. 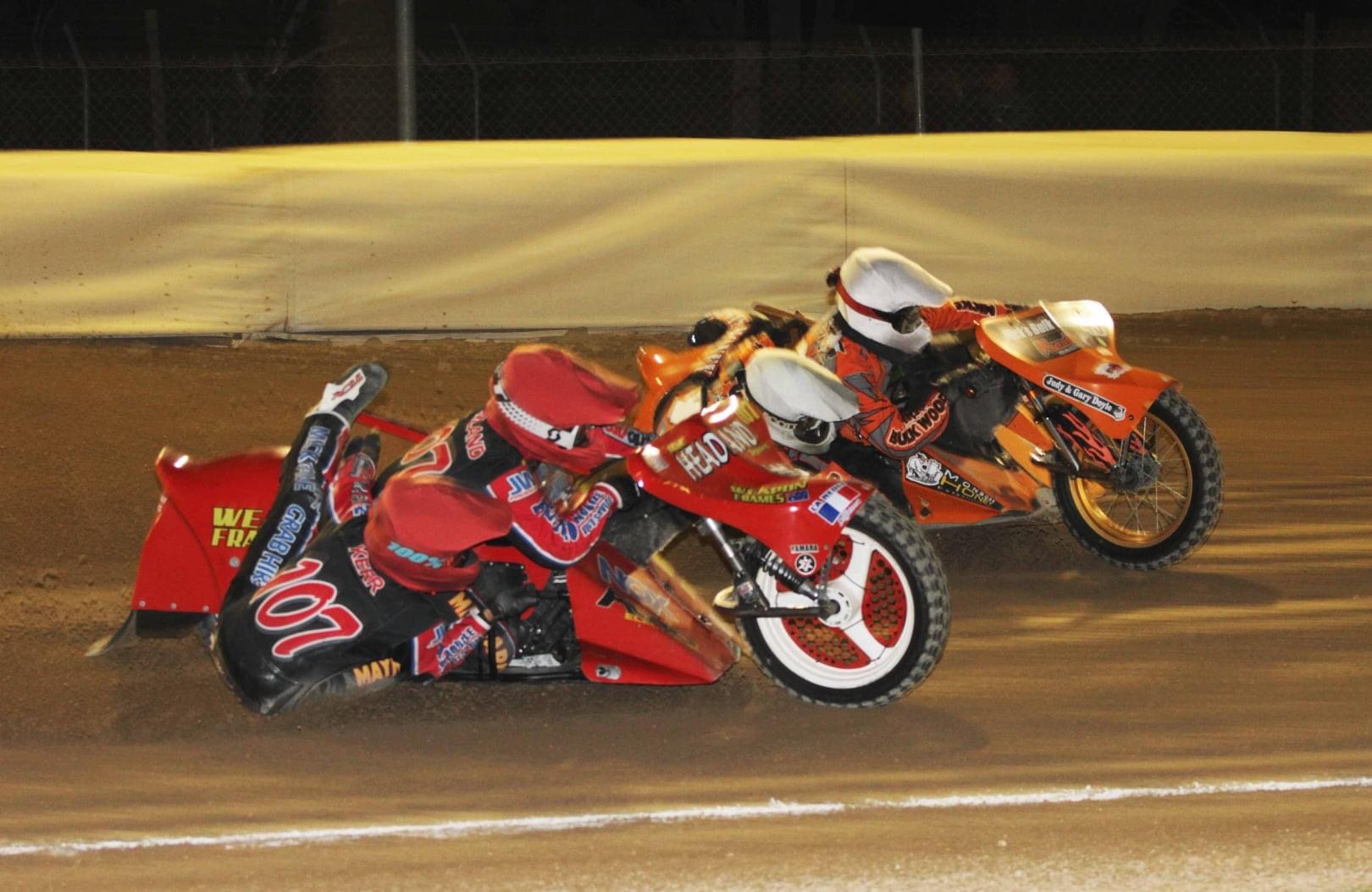 Results – King of the Murray Arenacross 2021 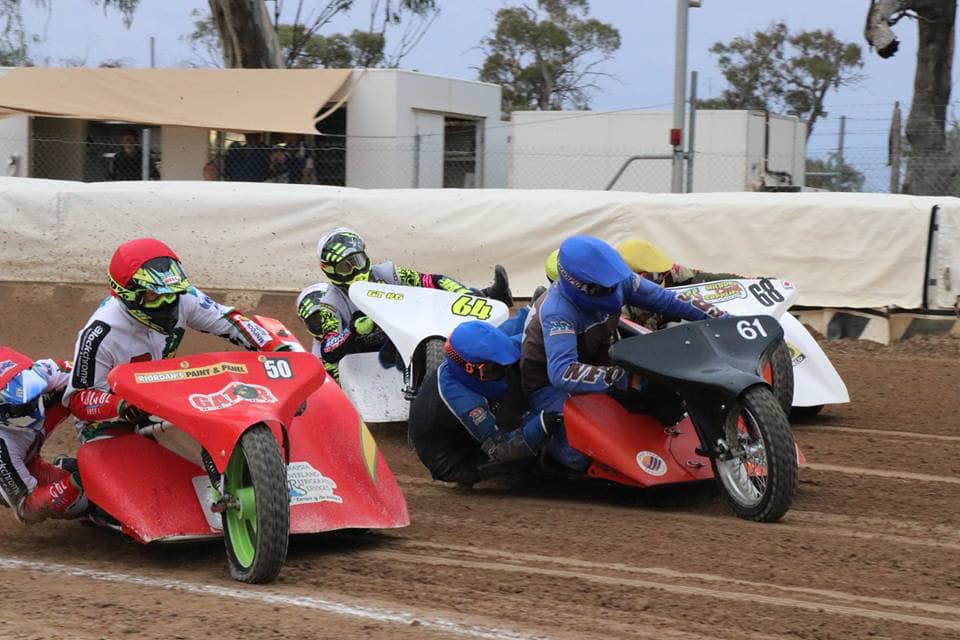